The Wabbit and the Photo Finish 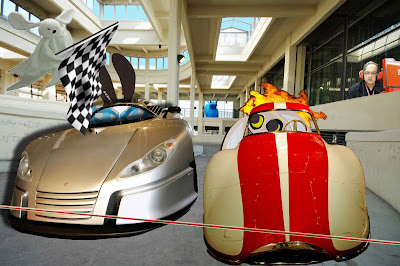 The Wabbit hurled Wob around the last two spirals of the ramp. He could see Lapinette behind him with no way through and he smiled as the finishing line loomed fast. He was wondering where to take everyone for the winner's Gala Dinner, but with a sudden blast of flame and a loud bang, Lapinette squeezed past him with only a millimetre to spare. A chequered flag was fluttering frantically. "Frightening Photo Finish!" shouted Ghost Bunny and waved them both down. "Sergio, would you please check the camera?" she yelled. "Sergio is it?" murmured the Wabbit. "Ghost Bunny gets around, Wob." "She took a Marshall's course at the Autodromo Lombardore," said Wob. "There's an awful lot no one tells me," said the Wabbit. "Anyway I might not have to buy the Gala Dinner." "It is custom and practice that the loser pays for the aperitivi," said Wob. "I needed more information," said the Wabbit. "Ha!" said Wob the On Board Control and gave what the Wabbit thought was a chuckle. "You should map that in," he said. The Wabbit grunted. He could see Lapinette hopping happily towards him and he leaned out of the window and smiled a limp smile." "You're an excellent competitor and a fine Wabbit," she smiled in a sports wabbit like manner. "But you need to be prepared for the unexpected." The Wabbit grinned an enormous grin. "You win some, you lose some, you wreck some," said the Wabbit.