The Wabbit has Double Vision 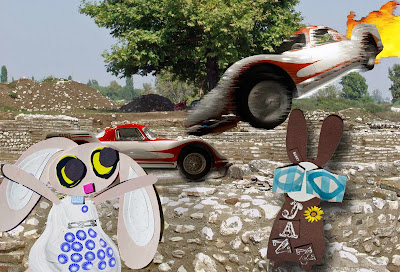 "This looks like an archaeologists’ dig," said the Wabbit, knowledgeably, "Yes," laughed Lapnet, the demi-Goddess. "Silly sausages. They find stuff that I wouldn't give house room and then cheer." They both laughed. "Did you learn about change, Wabbit?" said Lapnet. "More than I thought," replied the Wabbit. "Things do change and things are always the same and they're always different." "Exactly," said Lapnet and she suddenly waved her paws. The Wabbit jumped as he heard an enormous thunderclap. To his amazement he saw what he thought was Turbina whizz over his head. The Wabbit paused and watched her bank round and down. "Hang on," said the Wabbit "There's two Turbinas now!" "Yes," said Lapnet. "One of them is mine." The Wabbit thought for minute but he couldn't think of a reason why a Goddess shouldn't have a Turbina. "What will you call her?" asked the Wabbit. "Turbina 2," said Lapnet. "Very traditional," said the Wabbit. "Will you pass this way again?" asked Lapnet but then she saw that the Wabbit looked uncomfortable. "Soon, in your jet car," she said soothingly. "I will," smiled the Wabbit. "You might just need this." He plucked from his fur a card and wrote on it. Lapnet read it out loud. "Goddess on Call," she said. "Just slip it in the windscreen, no parking tickets." said the Wabbit. "Oh, I can make them go away," said Lapnet. They both laughed again. "What's your next mission?" asked Lapnet. "It's in the Lap of the Gods," smiled the Wabbit.