The Wabbit and the Bootleg Turn 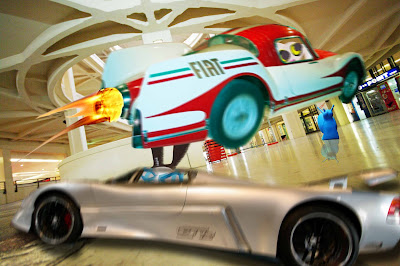 The Wabbit stayed in Turbina's slipstream until, just before the bottom, the ramp widened. With a sudden burst of speed he raced past Lapinette and gave a mighty cry of glee. "I told you we'd do it!" he shouted to Wob, the On Board Control. But just as he was feeling pleased with himself, the Wabbit became aware of a familiar sound. It was a whine that steadily increased until there was a loud bang and a searing hot wind bent his ears back. The Wabbit squinted up to see Lapinette fly over his head and straight into the lead. "Not fair!" yelled the Wabbit and shook a paw. "No rude gestures, it's in the rules," said Wob flatly. "Flying isn't in the rules," moaned the Wabbit. "Flying was not excluded at the start of the race," said Wob. "Would you like an audio playback?" "Later," hissed the Wabbit and he bent down to switch to manual control. He violently crashed the gears down to second and subtly flicked the steering wheel towards the opposite lane. "Aaaagh!" shouted Wob as he skidded across the ramp and spun 180 degrees to face the other way. "Aha!" said the Wabbit. "Wheels are best left on the ground.” "What on earth was that?" asked Wob. "It was a Scandinavian flick followed by a bootleg turn," said the Wabbit. "I'll map it in," said Wob. "The Wabbit grinned a big full toothed grin as he sped up the ramp. "You'll get the hang of it," said the Wabbit.