The Wabbit tries to Explain 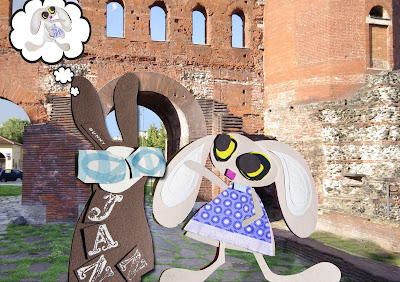 The Wabbit and Lovely Lapinette were hopping past the Porta Palatina, chatting as they hopped. "So," said Lapinette, "you told me about your journey, but little of your Goddess." "Demi-Goddess," said the Wabbit, "she was wonderful." Lapinette stopped hopping and turned. "And did this wonderful Demi-Goddess have a name?" she asked. "Lapnet," said the Wabbit. "Oh," said Lapinette and she pondered for a minute. "So what was she like?" she asked. The Wabbit thought it best to pay attention and said, "She was completely proper and formal as a Goddess should be." "Demi-Goddess," said Lapinette and she thought deeply. "Tell me, what was she wearing?" she said eventually. "Oh nothing much," said the Wabbit defensively and he cringed when he saw Lapinette's expression. "What I mean is that she had a short Greek dress with a waist tightly cinched by a silver belt." Lapinette glared but the Wabbit was in full flight and couldn't stop. "And she was garbed in white with blue flowers and the whole outfit was topped with a shoulder clasp." "A shoulder clasp?" hissed Lapinette. "To hold everything up." said the Wabbit weakly and he winced. There was a long silence. "What was I wearing yesterday?" asked Lapinette suddenly. "The usual ...? " queried the Wabbit hesitantly. As his voice trailed off, his head sank into his fur and his teeth became quite rigid. So he closed his eyes and wished he had never uttered a word. Then he felt a paw under his chin and he carefully opened a single eye to see Lapinette smiling sweetly. "I was winding you up," she laughed.