The Wabbit and Unut the Wabbit Goddess 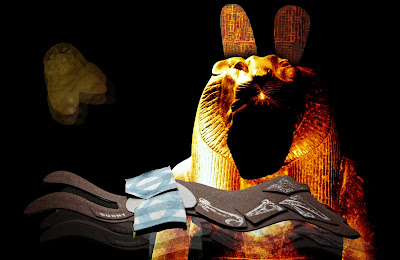 The Wabbit hung in mid air looking up at the face of Unut, the great Wabbit Goddess. "I'll never get used to that," thought the Wabbit sadly. "We meet again, Wabbit." said Unut gravely. "Again," echoed the Wabbit. "I feel your loss, Wabbit. But most of all I feel your anger,” said Unut. "I should have known. I should have been in touch. I should have been better informed," shouted the Wabbit. "Thrice should!" boomed Thoth, the Baboon God. The Wabbit had met Thoth before and he cringed but Unut turned and glared at Thoth. "I will put you outside if there's any more booming." Unut turned back to the Wabbit. "I'm sending you on a journey." "I haven't got time. I have a list. I'm spread thin," spluttered the Wabbit. "Thrice refused," muttered Thoth, under his breath. "Normally Wabbit," said Unut sternly, "when a Goddess sends you on a journey, it takes priority." "OK," said the Wabbit with a sigh. "Take your red chariot of fire with you, said Unut. The Wabbit thought and thought. "Red chariot of fire, red chariot of fire?" he asked himself frantically. "The Fiat turbine prototype!" shouted Unut with exasperation. "OK," said the Wabbit. "There's another you'll have to cope with on your journey," said Unut. "Who's that?" asked the Wabbit. "Yourself," replied Unut. And the Wabbit felt himself get thinner and thinner and thinner until he was just a faint scribble in the vastness of the cosmos.
at October 21, 2011