The Wabbit in the dark basement of the Goddesses 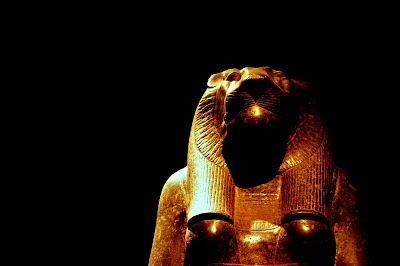 It wasn't hard for the Wabbit to see in the dark basement, coming from a great line of wabbits of a nocturnal disposition. "Looks more like a lion than a wabbit," thought the Wabbit. But as usual he felt disinclined to point it out. "If you knew what I knew, Wabbit, your fur would stand on end." The Wabbit's fur stood on end anyway. The voice was beguiling and silky smooth. "First there were the tomb robbers, then the merchants, then the so-called archaeologists. They were the worst. Bones everywhere." The Wabbit thought he could hear a little sob as the Goddess continued. "In here, in this ancient sarcophagus, lives Unut, Wabbit Goddess. They call me The Swift One." The Wabbit responded with respectful tone. "I have brought the ... stuff, Your Swiftness," said the Wabbit. "Now I will be complete," said Unut. "Come Wabbit, jump up and sit on my head. It will be like old times." Up jumped the Wabbit and took the rag, the bone and the hank of hair from his bag. In an instant they dissolved and all that was left was a little sand. "Oooh," thought the Wabbit. Unut spoke once more. "Thank you Wabbit, your mission is complete. And I am somewhat in your debt. You may request an audience with me at any time." Thank you Your Swiftness," said the Wabbit. But there was silence. Even though her eyes were completely open, she was most definitely in a deep wabbit sleep. The Wabbit detached from her head with some difficulty and as he did so, his paws made soft plopping noises. The Wabbit felt a sense of loss. He slid down the sarcophagus and flopped on the floor of the basement. Then he too fell deeply asleep.
at February 25, 2011