The Wabbit gets winked at. 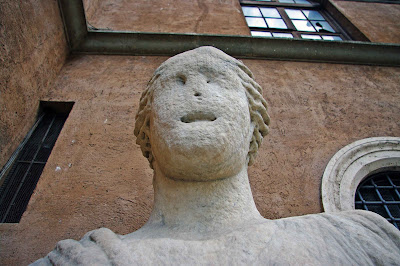 The Wabbit was in no great rush as he hopped from the station. But when he stopped in a quiet corner in the Piazza San Marco he felt the most peculiar sensation in his ears. Someone was staring at him. The Wabbit always knew when someone was looking at him. But in Rome, it could happen at any time. The Wabbit turned in the direction of the stare. "You look quite worn out," said the Wabbit. "It's because I've been staring so long. Hundreds and hundreds of years. You'd be worn out too." The staring statue seemed inclined to linger. The Wabbit put his paws behind his head. "Then why are are you winking?" "I wore out differentially. I have to keep a sense of humour about it. Otherwise I'd go off my head." The Wabbit was becoming tired of this banter and flopped exhausted in a heap. "Do you know what really gets in my hair?" The staring statue wasn't going to wait for an answer so the Wabbit stretched out. He had no particular timetable. "It's these people that pretend to be statues. What kind of activity is that? It's meaningless toil. And another thing, while I'm on the subject ..." The Wabbit broke in. " How do I get to Largo di Torre Argentina - where the cats live?" "Oh just keep going. You can't miss it. Although why anyone, especially a wabbit, should be interested I just can't imagine." But the statue was wasting its breath because the Wabbit had already gone. And as the Wabbit hopped he could hear a faint voice fading amongst the din of the traffic. " I stared at Audrey Hepburn once and so, do you know what I mean ... do you know? Do you?" The Wabbit hopped faster and faster and faster until he was certain he could hear no more.
at February 15, 2011