The Wabbit is admitted by Thoth, Three Times Great 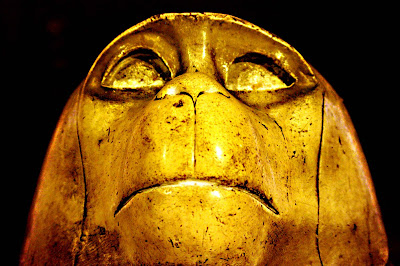 The strange force pulling the Wabbit stopped without warning and he found himself staring up at a giant figure. "That looks a bit like a baboon," thought the Wabbit, but he was much too polite to say so. Then the figure spoke. "I am Thoth. Three Times Great." Thoth paused for what seemed like an eternity. Then again his booming voice echoed through the long corridors of the old museum."Great Great Great!" The Wabbits ears went quite flat as the thunderous voice swirled around him. "OK, all right," thought the Wabbit, but he decided to err on the side of courtesy. "Your Thrice Greatness, I seek the Standing Goddesses." "Yes Wabbit, my Good Fellow," said Thoth. "Jolly Good. Just sign here." A long and complicated form appeared in front of the Wabbit and it was written entirely in heiroglyphics. The Wabbit had not the faintest clue but he had come a long way so he made his wabbit signature. Thoth continued. " ... and here and here and turn over and sign there. And now the date and the place, Museo Egizio." Thoth stamped the form three times greatly with three great thuds. Suddenly he towered over the Wabbit and his voice no longer boomed. It was impossibly low. So low that the Wabbit had to strain his ears forward. "Do you have the stuff?" The Wabbit noddded his head. "Jolly Good!" said Thoth as he lightly touched the Wabbit. The Wabbit's paws went completely limp and he felt himself falling, falling - into the depths of a darkened basement.
at February 24, 2011