The Wabbit gets a Super Makeover 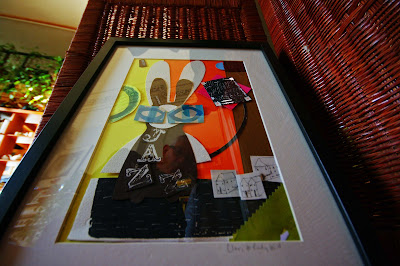 The Wabbit had received preliminary protocols for his mission. And the first of these protocols, was a makeover. The Wabbit sat back on his haunches and inspected the makeover pack. The Committee of Experts had cleverly awarded the assignment to renowned artist, Clari Csuk. "Most impressive," thought the Wabbit. He sat in front of the portrait and chattered his teeth for a whole minute. "Most impressive indeed!" The information that accompanied the makeover pack indicated that Clari's SuperWabbit design incorporated special features. The glasses were to help remove the Wabbit's blind spot (the Wabbit concentrated on the edges of his vision much too much). The tall ears were ultra special state-of-the-art ears. They allowed the Wabbit to levitate slightly and then hover for a bit. The Wabbit did not really know why that was necessary but he did think it would be the most terrific fun! Especially if he met the sinister agents of Rabit. The design also included emergency music and shelter accessories. But the nicest touch, thought the Wabbit, was his slogan, The Mysterious Wabbit is a Wobbly Wabbit. The reason for his nickname was a very long story, which the Wabbit decided to demonstrate. He gave a first try to his ears. shot a full metre in the air, then hovered in a more or less stable fashion. "Woah. Needs practice," thought the Wabbit and landed perfectly on all fours. "I am still the same Wabbit of course," said the Wabbit, adjusting his special glasses carefully and levitating a bit. Then he hopped off in his perfectly usual way
at February 01, 2011