The Wabbit looks out from a High Place 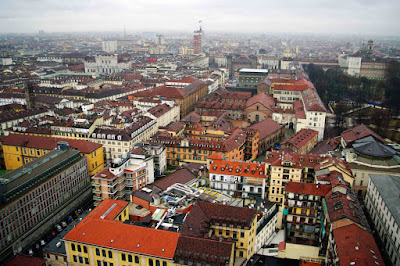 The Wabbit looked out over the Turin skyline. He thought that if he went to a high place he could see everything there was to see. The top of the film museum was a long way up and even with his powerful new ears, the Wabbit held on to the railings with both paws. Somewhere out there was the place of the Goddesses where the Wabbit was to deliver his importantly important objects. It was a lot of space to cover, even for the Wabbit. "Home of the Standing Goddesses, Home of the Standing Goddesses. Where could that possibly be, I wonder," wondered the Wabbit. "I'll just keep looking and perhaps I'll spot it." The Wabbit hopped between the feet of the crowds of school children who streamed out of the giant lift. "Standing Goddesses," murmured the Wabbit again, rather quietly to himself. "You're in the wrong museum, Wabbit". The voice of the lift attendant broke into the Wabbit's thoughts. "The Wabbit hopped up to the lift. "What museum?" "The Egyptian Museum of course. It's the only museum that has Goddesses around here." The Wabbit looked back across the city. "It's quite a hop, but worth it." said the attendant. "They might let you in free, what with you being a wabbit." The Wabbit was very pleased. He would not have to use his emergency coin. So the Wabbit hopped into the lift and shut his eyes very tightly indeed as the lift hurtled downwards at speed.
at February 22, 2011