The Wabbit looks at his Mission Papers 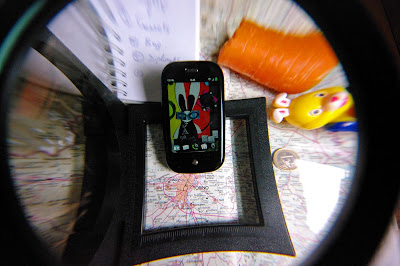 The Wabbit's papers had duly arrived and now the Wabbit knew where his mission would take him. A special communication device had arrived too and a wabbit-pen for making the most extensive notes. The Wabbit certainly appreciated the personalisation and was growing very fond of his makeover. He looked at the map through his magnifying glass (also provided). The map book was large and the paper rather thick and glossy. So the Wabbit was pleased that he didn't have to eat the whole thing this time. The Wabbit crunched on his carrot and studied the map carefully because he was not that familiar with his destination city. Carrots helped him concentrate as long as they were of good quality and not genetically modified. Crunch, crunch, crunch munched the Wabbit. Think, think, think thought the Wabbit. The only thing that the Wabbit didn't know was the precise nature of the mission itself. This information was to arrive under separate cover. The Wabbit thought it might be something to do with the social exclusion of Wabbits but he was only guessing. The Wabbit was intrigued. He sat up on his hind legs and addressed the room. "My name is Wabbit. The Wabbit. You must take my word for it." The Wabbit smiled that 28 tooth smile of his and polished his emergency lighter.
at February 06, 2011