The Wabbit is sent for R and R 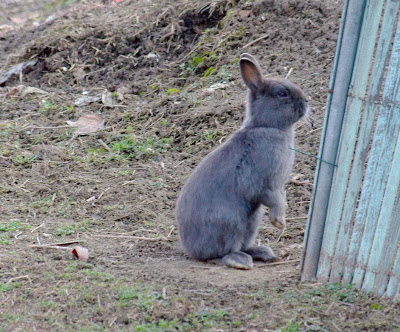 “Sir! Pssst! Over here. By the fence.” The wabbit by the fence tried to get the Wabbit’s attention. “Sir! You got too used to your Super Glasses! I’m looking at you, Sir! Straight in the eye, Sir!” The Wabbit slapped his brow with a paw. Of course. He was after all, a wabbit. The wabbit by the fence continued. “La Guardia del Corpo Sir! Name of Contadino. Franco Contadino. At your service. Sir! The Wabbit for once was quite stuck for words. “I think I’ll have to pass the buck.” The Wabbit chortled to himself. “Stand easy and shave a carrot, Contadino.” The Wabbit thought he was well up on military terminology, but was usually wrong or hopelessly out of date. Together they hopped across the enclosure. Franco Contadino continued. “Your orders have arrived by wabbit courier, Sir. You have 72 R and R in Rome. Take the Big Red Train. Rome is 500 clicks south east, Sir.” The Wabbit grinned. “I do know where it is. And please stop calling me Sir. This is a Wabbit Run isn’t it? I have to pick something up?” “All in your papers Sir. Good luck Sir!” The Wabbit could hardly believe his luck. He tucked his papers into his bag, took one backwards glance and loped quickly along the Via Bardonecchia. He could only keep up his top speed of 70 kph for a little bit. And then he began to cart wheel. And the people that the Wabbit streaked past saw but a blur. But they could hear singing. Roma dove sei? Eri con me, oggi prigione tu, prigioniera io. And being Torinesi, they sadly shook their heads.