The Wabbit gets wind of an Important Communication 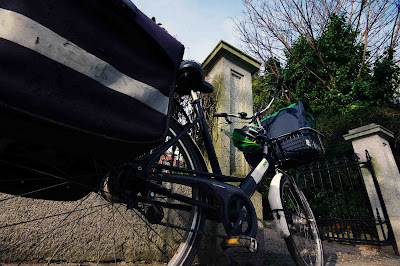 The Wabbit had become very frustrated waiting for his mission papers. He had taken to following the postman around the neighbourhood, dodging his wheels, his massive bag and his inclination to park on top of the Wabbit. Of course, he could not see the Wabbit so the Wabbit wished him no particular harm. Then the Wabbit saw the bike without the postman, so he hopped up to have long look at his bag. Perhaps there would be mail for the Wabbit peeping out the top. The Wabbit stared and stared. And then he had the most curious sensation. He could see into the sack! The Wabbit thought about it. "It must be my new super-glasses," he thought. The Wabbit levitated with his new ears until he was level with the bag and then he concentrated very hard indeed. Inside the bag was the faint outline of a Manila envelope addressed to the Wabbit and labeled Highly Confidential - Wabbits Only. The Wabbit scrunched up his eyes, but he was at the limit of his vision. Down went the Wabbit, making a faint whoosh as he landed. The Wabbit longed to take the envelope, which after all, was his mail. Then the Wabbit had an ethical fit. "It will arrive in the proper manner and I will open it in the same way," pronounced the Wabbit, grandly. And then he groaned. "Sometimes," muttered the Wabbit, "I'm one boring wabbit, indeed."
at February 04, 2011