The Wabbit finds the entrance to the Egyptian Museum 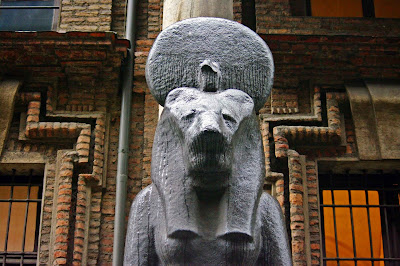 The Wabbit set off in search of the Egyptian Museum, hopping under the lengthy porticos to keep out the rain. But the cobbled streets frustrated his paws. So he cartwheeled a bit and sang a little song to keep up his spirits. "This wheel's on fire. rolling down the roadway, better notify my next of kin ..." Suddenly, the Wabbit was brought up short. "This is the place all right," thought the Wabbit. "It's a facsimile, a reconstruction but a standing statue nonetheless. I have reached my destination." The Wabbit checked his bag just to see if the important objects were all in place and was about to proceed to the door, when he felt the most peculiar sensation. He was being pulled by an unknown force towards the entrance. And as his paws slid across the slippery cobbles he could hear a voice and it was a distinctive Cockney voice that stood out. He was saying something familiar. "Just go in Wabbit. You don't ''ave to 'ave me blow the door off for you, do you?" "I just didn't hear that," thought the Wabbit. With little choice, he headed inside.
at February 23, 2011