The Wabbit gets a Surprise Meal 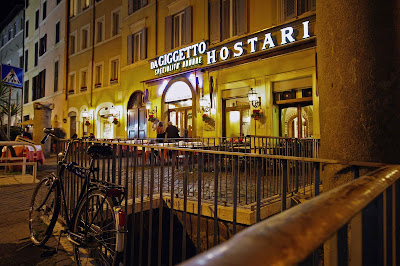 The Wabbit was definitely hungry. He had hopped all around and the extra items in his bag had not made it any lighter. “I have too much baggage,” said the Wabbit sagely to himself. With some time on his paws, he was nearing the Big Railway Station. So he wandered into the back streets, to an area that had been recommended by his friend Antiqicat on a previous trip. He soon found himself in the Ghetto di Roma. “This is a very interesting place,” thought the Wabbit. “And the food smells delicious.” So he hopped on a fence for a better look and an even better sniff. The Wabbit could smell heavenly artichokes and his very favourite sliced carrots. “Gnam, gnam,” thought the Wabbit. Then the Wabbit heard a voice and murmured to himself, “Where’s that voice coming from?” He was always asking himself questions. “The kitchen, Wabbit.” The Wabbit didn’t think he had spoken out loud. “People can even hear me think now," thought the Wabbit. “Time for a snack,” said the voice. “I’ll bring something out. I have wafer thin strips of artichokes with side tubers, your favourite carrot strips on a bed of grass and some fresh water.” The Wabbit sat on the fence and tucked in. And what he didn’t eat, he tucked away in the small space that was left in his bag. Sated, the Wabbit hopped to the station and quietly boarded the train for Turin.