The Wabbit gets off the Big Red Train 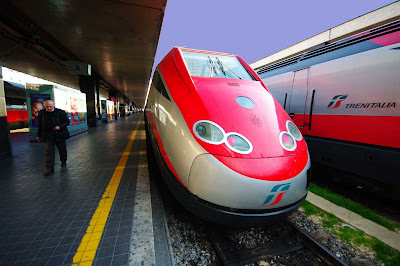 The Wabbit looked back as he hopped off the train in Rome Central. "Thank you Big Red Train, you saved my paws,” said the Wabbit to the driver. The driver was very busy but he waved to the Wabbit. “Too many people can see me still,” thought the Wabbit. But he didn’t mind really, because he was quite a friendly wabbit. He liked the Big Red Train. It could travel at 300 kilometres per hour, which was much faster than the Wabbit could ever go. Being on rails it couldn’t zig-zag like the Wabbit, although sometimes he thought it did its best. All the same, he could enjoy a salad sandwich in the buffet car and put his paws up for a while. The Wabbit paused on the platform and people hustled and bustled quickly past him with enormous bags. They certainly didn’t notice the Wabbit or much else for that matter. The Wabbit wasn’t quite sure what to do next. “Maybe I should visit my old haunts, but I don’t know,” thought the Wabbit. “I need to collect my thoughts.” Then he wondered what his thoughts would look like if they were collected in one place and all his fur stood on end. “That’s quite enough of that,” he said to himself. “I’m on a Roman holiday, just like that film with Audrey Hepburn.”So the Wabbit hopped off down the road. And as he did so he thought, “It must be fun to live in a place like this!”
at February 14, 2011