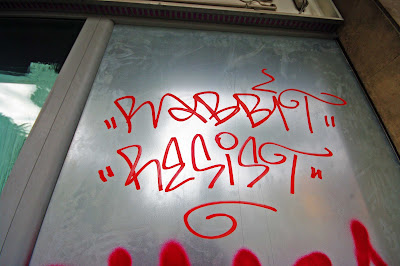 The Wabbit headed up the road at speed. With his bag of importantly important items on his back and wearing a toothsome grin, he gazed all around. He looked up and down and to each side to take in all his surroundings, because that was the way of the Wabbit. But then his eyes caught something that brought the Wabbit to a screeching halt. The Wabbit's exclamation was loud and echoed from the walls. “What is this blot on the escutcheon?” He had never been very sure what an escutcheon was, but he assumed it was something good, since it could be blotted. The Wabbit read to himself aloud. “Rabbit Racist” Then he repeated it and shook his head that there could be such a thing. The Wabbit welcomed all mammals irrespectively, unless they wished him some particular malice. He paced up and down and up and down, fretting and his back paws made a staccato sound on the road. It was only when he found himself complaining about the misplaced quotation marks that he realised the graffito didn’t say “Racist”. It said “Resist”. “Now that makes more sense,” said the Wabbit to himself. “But it should really end with an exclamation mark!” The Wabbit then made the appropriate correction with a red emergency marker that he kept in his bag - and loped onwards before anyone saw it was him.