The Wabbit runs into another Ancient Cat and gets a Package 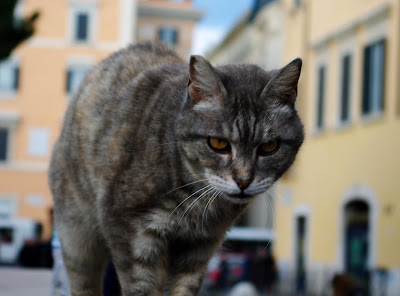 The Wabbit reached the Largo di Torre Argentina with ease and didn't even have to cartwheel. "I'm looking for Antiqicat." said the Wabbit to the imposing cat on the wall. "Have you seen him?" "He's on sabbatical leave," said the cat. "You may, however speak to me with absolute confidence.”The Wabbit wondered whether all cats spoke in this ponderous manner, but then, he had a peculiar turn of phrase himself. "Apparently I have to pick so something up." "Wait here. I shall be back forthwith." The cat was gone and back in an instant. Dangling from her mouth like a kitten was a small sack made from a rag, which contained some objects. "What’s in the bag?" The Wabbit was impatient. "In this rag are a bone and a hank of hair," said the cat. “You must return these to the Home of the Standing Goddesses in Torino. The return of the objects is vital” "I'm sure. Now this would be where in Torino, exactly?" The Wabbit preferred more of the information and less of the enigma. "That is for me to know and you to find out," said the cat annoyingly. The Wabbit suddenly seized the bag with both paws and threw it in his own bag. Then he bad the cat adieu. And he just couldn't resist a small bow. If he had been wearing a hat, he would have doffed it. "Be seeing you!" he said and was gone.