The Wabbit is sent for Analysis 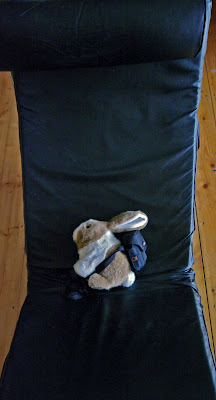 As an assessment prior to his mission, the Wabbit had been sent for analysis. The Wabbit did not mind at all. It was completely normal. Yet he found himself staring down at himself from the ceiling. Although it was almost always like that, it was a most curious feeling. From behind the couch, he could hear a scratchy pen, writing things down, so the Wabbit remained quiet and reflected on his mission. "How do you feel, Wabbit?" The voice from behind the couch was kindly enough. "You're worried about how I feel," replied the Wabbit. The Wabbit couldn't help it. He was a menace in analysis.. The silence grew long and the Wabbit continued to watch himself . The more he was quiet, the more he could hear the scratchy pen, scratching. "Where are you now?" said the voice. "I am looking at myself," said the Wabbit with honesty. "And what do you see?" continued the voice. "I see a Wabbit with a bag," said the Wabbit. "What might the bag contain, I wonder," came the response. At last the Wabbit had something to say. "An emergency coin, a lighter, and a diplomatic pass and ...." The Wabbit's list was very long and the analyst stayed quiet too, for a very long time. Such a long time passed that the Wabbit looked behind him - and the analyst was asleep. The Wabbit couldn't help looking at the scratchy notes. There was a drawing of a wabbit, a shopping list and a single comment. ""My experience of the Wabbit, is that he is well capable, if occasionally annoying." The Wabbit smiled a toothsome smile, slid down from the couch and was gone. And so was his bag.
at January 28, 2011