8. Skratch and the Instant Proposal 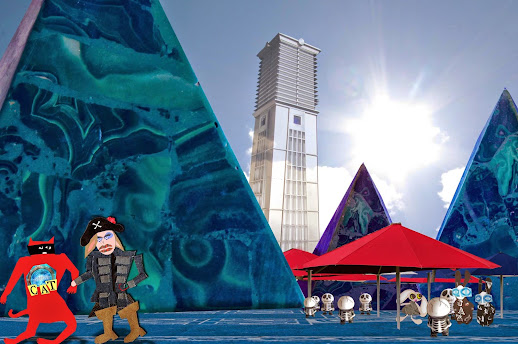 As the Wabbit and Lapinette watched the preparations for the Sago Ceremony, Skratch the Cat took his opportunity. "Captain Jenny," he whispered, sinking to his knees. Jenny looked down with interest and Skratch began. "I adore you Captain," he said. "May I have your hook in marriage?" Jenny rocked back and forth in a pirate fashion. Then she leant forward and pursed her lips and muttered. "Where's my dowry?" "That really comes from your side," replied Skratch, who had been a Cat Burglar and knew what was what. "But I have some jewelry put by."  "Oh," said Jenny, and she smiled. "Who's going to marry us?" Skratch gestured towards the Wabbit's android double. "Wabsworth has a divinity sub-routine," he purred. Jenny chuckled. "Who's going to give me away then?" "The Wabbit of course, he's senior." Jenny let forth a kind of a giggle. "I see no ring!" Skratch felt beads of perspiration under his mask. "I'm certain the Wabbit has one in his fur." "Aha!" said Jenny. "I don't want a second-hand ring the Wabbit found in a market." Skratch was quick. "I'm sure there's a special ring somewhere on this island." Now Jenny grinned. "Perhaps we'll find one." Skratch brightened and Jenny drew close. "I really don't know, Skratch. But I tell you what I'll do." Skratch felt his legs go rubbery. "I'll think about it," said Jenny curtly, then paused. "What on earth that thudding?" "My beating heart," sighed Skratch.
at May 30, 2014