9. The Wabbit and the Power of Maps 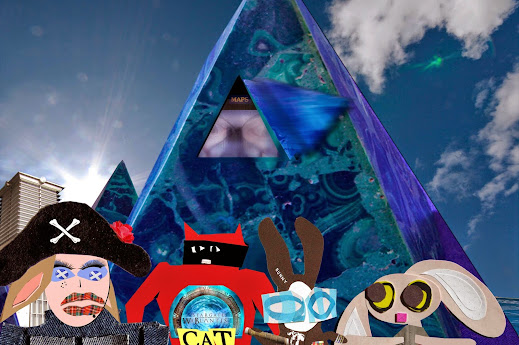 Leaving Wabsworth to go native with the locals and gather information, the team gathered in a likely spot. "I don't see anything," said Lapinette, "are you sure this is right?" "That," said the Wabbit, "was my information," and he rummaged frantically in his fur. Skratch the Cat pricked up his ears. "Did anyone hear that?" Captain Jenny blinked and her nose twitched "A rumbly sort of noise?" "A rumbly, slidy rasping?" added Lapinette. "Shhh .." said the Wabbit as he flourished his map. Skratch reached for it but when his paw touched the parchment, a surge of energy shook them both. "Static?" suggested the Wabbit and he narrowed his eyes. "Oh, let me see," said Lapinette and she gripped the map by a corner. "Ouch," shouted the Wabbit. Lapinette looked at her tingling paw, shook it and said something under her breath. Pirate Jenny thought for a minute. "Let's all touch it together." The Wabbit nodded. He unrolled the map and each grasped a corner and waited. Nothing happened. The Wabbit suddenly grinned and rolled up the map. "Use your hook, Jenny!" Jenny changed paws and her hook coiled round the parchment. "Grip it," said the Wabbit. The map began to vibrate. They all looked round as a door swivelled and a passageway opened in the pyramid.  "Hold the map!" shouted the Wabbit and they all grabbed for it. Then they shimmered and vanished - as with a violent rasping, the door swung shut.
at June 03, 2014