3. The Wabbit & the Whale's Undertow 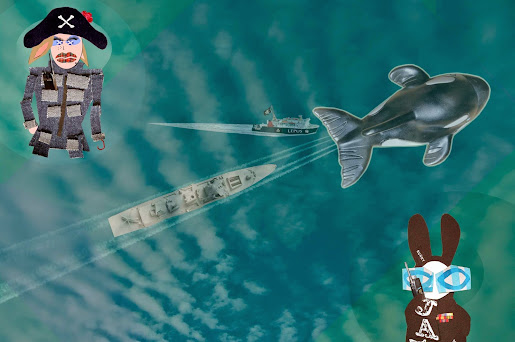 Neither the Wabbit nor Rabbit Jenny could do the slightest thing about what happened next. Thoth the Whale expanded to giant proportions and the undertow from his wake trapped both Lepus and Unut in a vice-like grip. The Wabbit looked at his instruments and shrugged and gave up as the Unut was hauled across the ocean. On the Lepus, Jenny tried fighting with controls but to no effect. But somehow, Thoth glided on the ocean surface like a hydrofoil. The Unut's video link sparked out, so the Wabbit looked away and tested the ship-to-ship radio to see if it was working. There was a whoosh from the speaker as if the sea had got into the circuits, but Jenny’s voice cut through like crystal. "We have to run with the whale, Commander."  "I hope he really knows where he’s going," sighed the Wabbit. Jenny’s eyes narrowed. "The Goddess Unut sent him?" "She tends to interfere," said the Wabbit. There was an awful noise as the hull of the Lepus rumbled then groaned. "Will she hold?" asked the Wabbit. "She’ll hold," said Jenny, "she’s been through worse." "Brecan’s Cauldron?" asked the Wabbit with a shudder. The radio whooshed but it couldn’t cover the clarity of Jenny’s voice. "I love to sail forbidden seas, and land on barbarous coasts." Now silence fell, except for the roaring of water past hull. "What can Wablantis look like?" murmured the Wabbit. "Ignorance is the mother of fear," responded Jenny. "Who’s the father?" smirked the Wabbit.
at May 19, 2014