6. The Wabbit lands on Wablantis 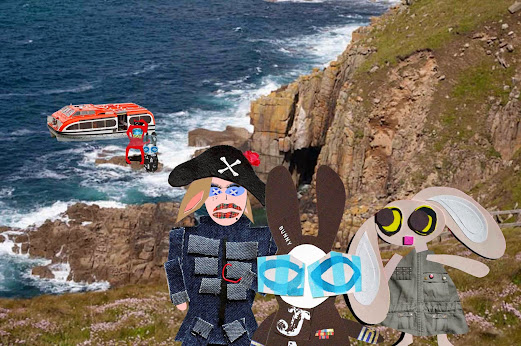 "It's just up here," said Lapinette, but the Wabbit knew from his map that this might be a long way from their goal. So he hopped forward with a stern look to give the impression he knew what he was doing. "I though it would be warmer," said Captain Jenny, clutching an arm to her chest. "This is my summer tunic." Lapinette smiled because she had seen the whole island from her helichopper. She thought the island's broad plains and rounded hills might get very hot indeed - so she had dragged a light battledress from her locker. The Wabbit spoke in a too-loud voice and glanced all around. "I find it rather strange that no-one's about." "We should be on our guard," Commander," said Jenny. "These quiet places with no sign of life hide awful secrets and conceal strange practices." Lapinette was intrigued. "What sort of thing?" "Devil worship," replied Jenny. "And ritual sacrifice," added the Wabbit. But Lapinette had studied anthropology in the field with the Bare’e-speaking Toradja. "In Central Sulawesi," she nodded, "it ensures fertility." Jenny snorted. "Aren't they the ones that drink their own ...?"  No," said Lapinette quickly, "that's the Sambians of New Guinea." "Well, did we bring any gifts for inhabitants?" asked Jenny. The Wabbit dug deep in his fur and found a packet of sago long past its sell-by date. "We'll be fine," he murmured.
[Background photograph: Mick Warne]
at May 26, 2014