7. The Wabbit and the First Encounter 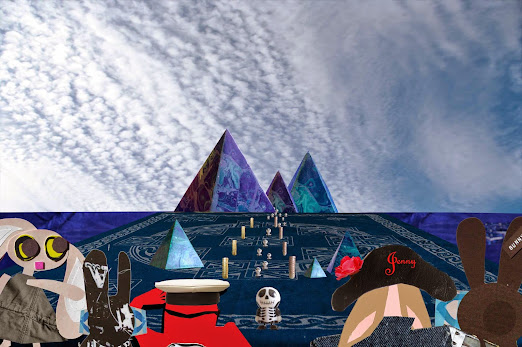 The team traversed the island and from a vantage point, surveyed the scene. But as they looked down at an avenue of pillars, they saw figures emerge from between the blue pyramids. One larger than the rest looked up and called out. "Do you seek treasure?"  Jenny looked at Lapinette. "You're the anthropologist, it's your call." Lapinette thought carefully. "We seek no treasure, we seek what is rightfully ours." Creatures scurried around and held impromptu discussions. "What is it that is rightfully yours?" cried the leader. The Wabbit shook his head. "We're not rightfully sure, but we have a map which leads to another map." The leader laughed. "Throw away your map, we know where everything is." "In that case," said Lapinette, "we'll pop down and interview you about your customs." There was a brief interval while more discussions took place. The leader hailed them again. "Have you brought any sago?" Lapinette smiled, because for once the Wabbit had something useful in his fur. But Jenny broke in quickly. "Sago is a scarce commodity, but we might be able to assist you." The Wabbit gripped his hidden packet tightly. "Have you heard of antique sago?" he called. A cheer rose above the island and some creatures began to dance. "We will now prepare the altar," called the leader. "I don't like the sound of this," said Skratch the Cat.
at May 28, 2014