5. The Lost Island of Wablantis 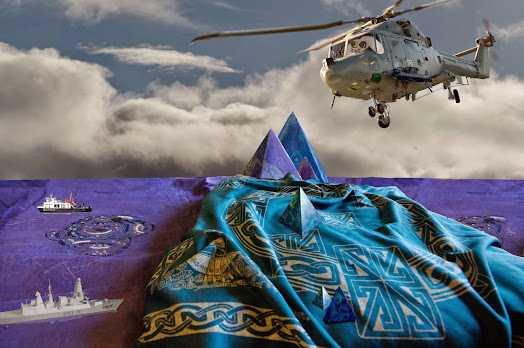 Lapinette didn't need much. She saw a tiny patch of blue and her helichopper leapt into the sky like a grasshopper. She looked down to see the Lepus and the Unut break through the jungle inlet into an electric blue sea. Lapinette's rotors chopped through strange air as she wheeled across an other-worldly landscape. She pawed her radio into life. "Lapinette, Lynx 2 calling." Nothing. She switched to the short wave. "Lynx 2. Do you copy?" Now the radio whined. "Captain Jenny receiving. What can you see?" "Strange shores, Captain," muttered Lapinette. There was a break in transmission. "Have you eaten recently?" broke in Jenny. There was no reply and Jenny's voice became strict. "There are salad sandwiches in the glove compartment. Eat." Lapinette gripped a sandwich in her mouth and skittered the Lynx along the island. "Report," snapped Jenny. "Six blue pyramids of varying sizes," said Lapinette. "Sounds like Ancient Aliens," said Jenny, "so is there any life?" "No visible life," said Lapinette. "Then it's a rather normal kind of place," quipped Jenny, scanning the horizon. She made out a dot and she knew it was Lapinette.  "Can you see a suitable spot?" Lapinette swooped towards the coast. "One klick east of the Unut," said Lapinette. "I see a road and a landing strip." "Land on the Unut," said Jenny. Lapinette had a thought. "What happened to the Wabbit?" Another signal intruded. "I hear everything."
at May 23, 2014