1. The Wabbit and the Improvised Map 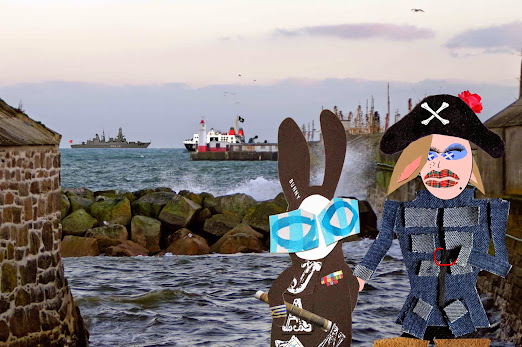 On the tiny dock of a little-known port, the Wabbit and Rabbit Jenny met prior to departure. "Our task is formidable," said the Wabbit. "So are we," said Rabbit Jenny the Pirate Chief. The Wabbit grinned and glanced at the scroll under his paw. "This should be of help." "It looks like map," said Jenny. "I made it myself using hearsay and tittle-tattle," said the Wabbit. Jenny's eyebrows fluttered and her lips were questions. "No-one really knows where Wablantis is," continued the Wabbit. "The Ghost Island?" frowned Jenny. "Few have seen it and lived to tell." The Wabbit looked surprised. "What else do you know?" "Those who land and seek treasure there can never leave." The Wabbit's fur stood on end. "We're not looking for treasure precisely." Jenny gripped the Wabbit's paw and he felt it tingle. "What are we looking for?" she murmured. "Another map," said the Wabbit. Jenny knew what was coming and made a wry smile. "That map will indicate the position of another object." "How did you know?" asked the Wabbit. "I'm a pirate," said Jenny. "But even so I don't know what the object is." "Neither do I," shrugged the Wabbit. Jenny swayed backwards and forwards as a pirate chief should. "We'll know when we find it." She turned to look at her ship. "It may not be down on any map, Commander." The Wabbit nodded. "True things never are."
at May 14, 2014