2. The Wabbit and Ocean Turbulence 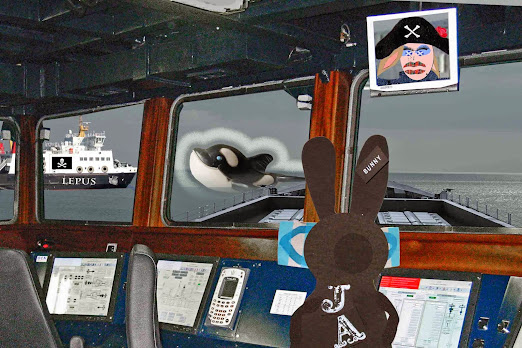 It was the Wabbit’s watch and he was looking forward to a quiet one. Dusk settled across the ocean and he relaxed and glanced at monitors and yawned. But he kept an eye on the progress of the Lepus and to break the monotony, occasionally spoke to Captain Rabbit Jenny on ship’s video. He was looking over to the Lepus and smiling to himself when he noticed the previously calm waters were a little disturbed. So he called Rabbit Jenny - but just as her face swam into view, something leapt from the sea with an incredible splash and made a series of low booming sounds and clicks. Foam spurted as the creature’s tail threshed. "I see it, Commander," said Jenny. "You could hardly miss it," said the Wabbit. "Hang on. It’s communicating with my bridge crew," said Jenny. "Do they speak whale?" asked the Wabbit. Jenny raised a paw. "We can decode the sounds. I’ll patch you through a translation." The Wabbit listened intently. "I am the Sea God!" boomed the whale, "and I am thrice great." "That sounds very familiar," thought the Wabbit and he spoke to the monitor. "Jenny, his name is Thoth. Confirm he is thrice great, or we’ll be here all day." Threshing tortured the water and casually sprayed both ships. "I am to assist you find the Lost Island of Wablantis." The Wabbit addressed Thoth directly. "Thoth, do you know where we’re going?" A jet of water shot in the air and a piercing wail shook the vessels. "I am thrice sure!" The Wabbit looked at Jenny in the monitor and shook his head and winked - and Jenny winked back.
at May 16, 2014