The Wabbit pulls the Plugs 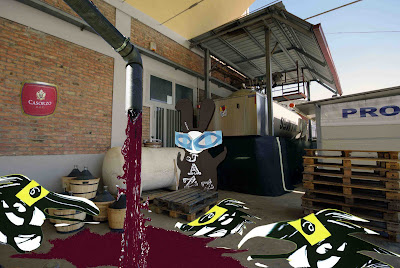 The Wabbit loped rapidly to the Cantina on the corner and as he loped he could hear the thud thud of Lapinette's automatic in the distance. He screeched to a halt and launched a kick at the levers that he knew would release the wine to the hungry horde of Skuttles close on his tail. Nothing happened at first, but the Wabbit was accustomed to the way of levers. He hummed a little tune as the pipe began to drip. Then wine spurted and gurgled and finally gushed out in torrents. The Skuttles stopped dead and gathered all around, guzzling at the ever-widening pool. As they drank, they made strange gutteral honks and their jaws enlarged so that they could drink even more wine. "Compliments of the house," muttered the Wabbit and bared his 28 teeth. The Skuttles paid little attention and they drank and drank and drank. Then to the Wabbit's astonishment they threw up their distended heads and began to sing with shrill voices. "Drinkin`Wine Spo-De-O-De Drinkin Wine, Drinkin Wine Spo-De-O-De!" And then they looked at each other and started drinking again. Gunfire had abated and the Wabbit could hear the sporadic sounds of Lapinette mopping up rogue Skuttles. And then with a flash of clarity, the Wabbit knew what to do next. "Vino Skuttles, 2011," he mused.
at September 07, 2011