10. The Wabbit gets his Character 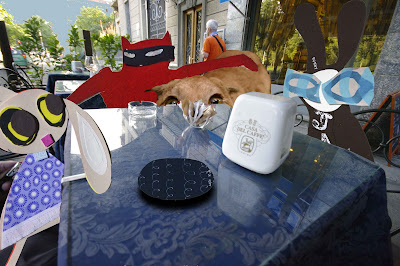 "I believe you have my automatic," said the Wabbit. "You asked me to drop off your other coat to be cleaned," retorted Lapinette. "It's a good thing I checked your special pockets." The Wabbit thought for a moment and imagined his automatic going through machines at the laundry. Then he smiled a most sinister smile. "That could have gone badly I suppose," he grinned. "Wabbit you nearly ruined a year of careful planning with your pranks." "Pranks?" said the Wabbit. "We wrapped it all up." "That's not the point," said Lapinette. "Well perhaps the plan should have been implemented the sooner," said Puma. Skratch looked at Lapinette and flinched away. "Oh that's all in the past," smiled the Wabbit, clapping his paws. "Tell me Lapinette, what was all that holograph stuff?" "The holographic creatures live on a single surface that includes all their information." said Lapinette. "They would break free and travel the space-time continuum at speeds faster than light," "With old fashioned explosives," murmured Skratch and he dug Puma sharply in the ribs. "It's a puzzle, but trading arms seems to energise them." said Lapinette. "What kind of adventure was it then?" interrupted Skratch, who was bored with quantum mechanics. Lapinette looked at them and sighed.”A comedy western?" Skratch laughed and stood up. "No, we will not die like dogs!" he drawled. "We will fight like lions!" growled Puma. “Because we are ..." shouted the Wabbit with a paw in the air. "The Three Amigos!" they hooted.
at September 28, 2011