9. The Wabbit is taken by Surprise 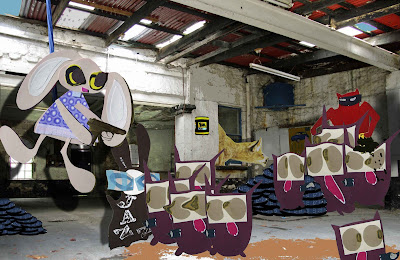 When the Wabbit uttered the words "Be seeing you," it was signal for action. Puma roared with a roar that shook the windows. Skratch threw anything he could find, with singular success. The Wabbit thought it was all going rather well until there was a sudden crash and Lapinette came plunging through the roof. "Belay the firearms, Marchesa!" shouted the Wabbit, somewhat nautically as befitted his rank. "You looked under pressure," yelled Lapinette. "Never a bother," replied the Wabbit and waved his arms at a retreating Eul. "We've been tailing them for a year," shouted Lapinette. "The Euls are holographic. They buy and sell explosives." "Oh, that explains everything," grumbled the Wabbit to himself. "How shall we round them up?" he asked, in an effort to be inclusive. "Tell them your best joke," said Lapinette. The Wabbit tried to think amidst the roars and the splats and he covered his ears from the din until something finally made him smile. "How do you know carrots are good for your eyes?" he called. The Euls turned round as one and demanded the answer. "How, how?" they cried. "Because you never see wabbits wearing glasses," said the Wabbit. The Euls took one look at the Wabbit and howled with laughter until they couldn't stop. The more they laughed, the more they shimmered and the more they shimmered the more they laughed. Until they all lay on the floor shaking. "They're out of energy," said Lapinette. "Good thing," said the Wabbit. "I'm out of jokes."
at September 27, 2011