5. The Wabbit makes a Suggestion 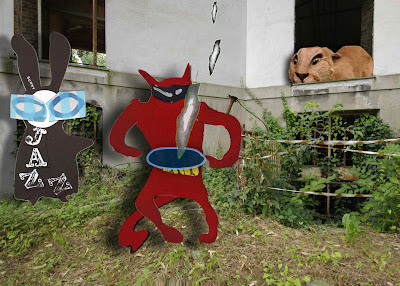 The Wabbit was initially surprised when Skratch the Cat Burglar produced a blue disc from his fur. "How did you get it?" asked the Wabbit. "I'm a burglar," said Skratch. "I took it when he was laughing at my jokes." "I wonder what it is?" mused the Wabbit. "What would you do with it?" asked Skratch. The Wabbit replied quickly. "Me? Well, I would push it and pull it and poke it and see if it did anything." "Is that wise?" asked Puma. "You sound like Lapinette," said the Wabbit. "There's a small groove. Maybe I could get a claw in and lever it back," said Skratch enthusiastically. "Good plan," commented the Wabbit and rapidly hopped back. Puma covered his eyes with a single paw and emitted a low growl. "Here goes!" shouted Skratch and he pushed a claw far into the groove. There was a slight crack and a puff of hot gas rose from the disc. "Oh, I say" said Skratch. "Haw haw haw," he laughed. "Haw haw haw." "Oh no," growled Puma. "He's got it now." Skratch bounded up and down and howled with mirth. "I wonder how long it lasts, Puma. We haven't got all day," said the Wabbit, who was wishing he had said nothing. "Just joking," said Skratch and smiled. The Wabbit stamped a heavy hind foot and shook a paw at Skratch. "It's a familiar smell," said Skratch sniffing. "Stings the eyes, smells of ammonia." He paused and looked blankly at the disc. "Cordite," said Puma. "I'll throw it over there then," said Skratch as he launched the disk through the air. And they all dived for cover as a terrific blast showered them with earth and stones.
at September 22, 2011