8. The Wabbit plays for Time 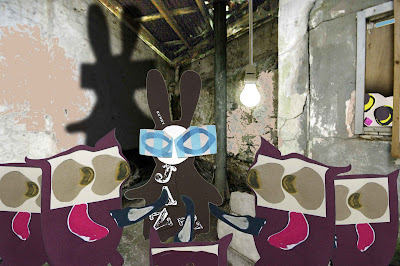 The Wabbit found himself penned in to a corner of the deserted garage by a group of Euls who arrived without warning in great number. The Wabbit noticed that they were rather agitated so he faced them with what he thought was an engaging expression."Where's our cash?" laughed the Euls. "We want cash!" "Yes of course," said the Wabbit patting his fur. "Oh, I seem to have left my cash in my other coat. How remiss of me," "Haw haw haw," laughed the Euls and looked at each other. Suddenly they fell into silence. "That's not funny," said the biggest Eul. The Euls all nodded and agreed that the situation was without humour. "Have no fear," said the Wabbit. "I will write you a promissory note, redeemable at the International Wabbit Bank." "We don't like banks," said one Eul." "You're not alone," replied the Wabbit. "Where is this bank?" asked another. "Above the pet shop in Corso Svizzera," said the Wabbit. The Euls giggled for a moment, then stopped abruptly. The Wabbit smiled. "I will go there and ensure funds are in place. I do hope there's no queue" "We don't like queues," said the largest Eul. "Tell me about it," said the Wabbit. He hopped carefully to right and left through the crowd of snickering Euls and when he reached the door, he wheeled around sharply. "Be seeing you," he said. The words were hardly out of his mouth when he caught sight of familiar eyes, peering through the boarded window. "That's torn it," thought the Wabbit.
at September 26, 2011