The Wabbit has Company 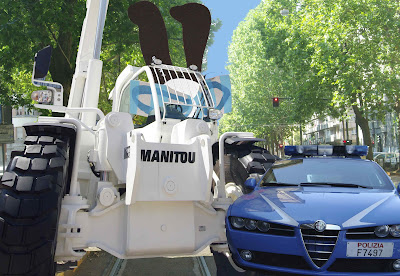 Whatever button the Wabbit pushed, it propelled the vehicle down the Via Nizza at a considerable pace. So the Wabbit settled in. He had fun on the interchange at Carducci, swung left over the railway line and headed across the city. The Wabbit noticed people scatter in his path. "This is the way to travel," said the Wabbit and he gave the Manitou more throttle. He had just reached Corso Svizzera when he heard a wailing sound behind him. "Oh no, I've got company," sighed the Wabbit looking at a police car in his mirror. He suddenly threw the Manitou into the tram lane. "I'll lose him at the junction," thought the Wabbit, "if I can just get in front of that tram." The Wabbit swung in and out but so did the police car. Then he swerved around three cars, a motorbike and a strange three-wheeler that he had never seen before. But the police car got closer and closer until finally it managed to pull alongside. The two vehicles locked together and they travelled quickly together for some time until the Wabbit realised that the policemen were shouting something. "Commander Wabbit, Commander Wabbit!" He could just hear the words above the roar of his engine. The Wabbit glanced down at the police car. "We're your escort," shouted a policeman. "This will cost me several lunches," grimaced the Wabbit.