6. A Pizzino for the Wabbit 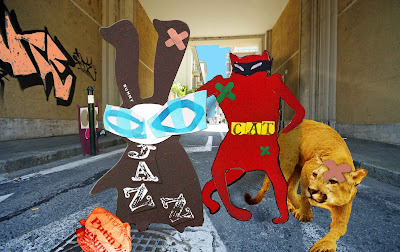 Slightly dishevelled, the Wabbit, Skratch and Puma made their way through a distant part of the neighbourhood. They were just chatting happily when a crumpled ball of paper floated down in front of them. "What's that crumpled ball?" asked Puma. The Wabbit bent down and poked it with a paw. "I've seen one before," he said. "It's a pizzino!" The Puma looked at Skratch questioningly. "It is a secret communication, Puma," Skratch told him gravely. "Undoubtedly it will be in code," said the Wabbit and he straightened it out and read it. "What does it say?" said the Puma impatiently. "Hang on," said the Wabbit and he consulted a small notebook, which he had taken from deep inside his fur. "It contains directions to an old garage where we will inspect the merchandise." "Don't you think it’s time to call in reinforcements?" asked Skratch, who was in the habit of exercising caution where pizzini were concerned. The Wabbit straightened and gave a nonchalent toss of his ears. "I think we can handle this," he said. Puma hissed softly and tried hard to squint upwards at the bandage on his forehead. "Where is this garage?" he growled. "It's beside the old ruined house," replied the Wabbit. Both Skratch and Puma looked at each other, blinked their eyes and hi-pawed. "Then we have the advantage of them," growled Puma.
at September 24, 2011