4. The Wabbit and Business 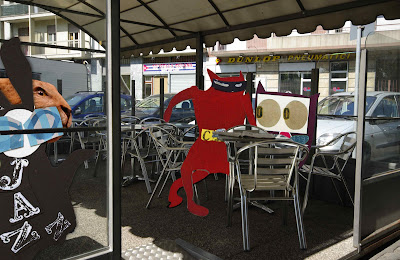 Skratch guided his mark into a nearby cafe, followed closely by Puma and the Wabbit. "So to business," said Skratch. "Business is business," said the creature and started to laugh. "Haw haw business," he cried. "Haw haw haw." "My associates and I are somewhat interested in your discs," continued Skratch. "How many?" giggled the creature. Skratch hadn't anticipated this turn in conversation and grabbed a number from thin air. "Five," he said nonchalently, glancing round at the Wabbit. The Wabbit jumped up and down frantically and waved his paws upwards. "Five hundred ..." ventured Skratch hesitantly. The Wabbit hissed and waved his paws high above his head. "Five hundred thousand," said Skratch and smiled. The Wabbit cringed and cradled his head in his paws. "What are we going to do with ..." grumbled Puma, "Shush," said the Wabbit. "We'll work something out." "How shall we take delivery?" asked Skratch of the creature. "Haw haw," laughed the creature. "We'll be in touch so where do we haw haw find you?" Skratch glanced over at the Wabbit and the Wabbit glared back and whirled his paws around in circles. "We homies, we hang in the hood," said Skratch." The creature began to shake with laughter and the more he laughed, the more he shook and everything trembled. "Now the joke's on him," murmured the Wabbit.
at September 21, 2011