The Wabbit: Once upon a Time in Piemonte 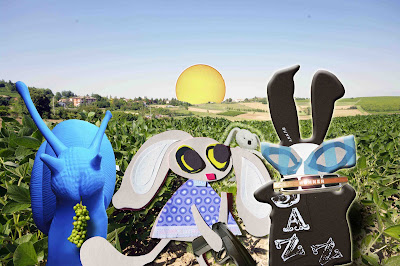 The Snail stoppped nibbling his grapes and cleared his throat. "I believe," he said ponderously, "that it is the custom at this juncture to enquire what kind of adventure that was." "We usually leave that for the after-adventure dinner," said Lapinette. "Nom nom," said the Snail with glee. "It was a Spaghetti Western," said Ghost Bunny. Everyone turned to look at her. "Woooh woo woooooo," she moaned in an Ennio Morricone fashion. This met with blank faces and Ghost Bunny realised she was getting nowhere. "My Name is Nobody," she added and fluttered up and down. "No it's not," said the Wabbit with a straight face. "High Plains Ghost Bunny?" asked Lapinette. "The Good the Bad and the Snuggly," said the Wabbit, brushing his fur and looking at Lapinette. "The Ruthless Four," said the Snail. There was a general murmuring of approval and mutual congratulation. "What next?" said Ghost Bunny. The Wabbit lifted his harmonica, tapped it against his a paw and said, "Wabbit with a Harmonica." He lifted the harmonica to his lips once more and let forth a drawn out wail that moaned its way across the fields and ruffled the crops. Then he let out another one much longer than the first. Everyone's fur stood on end except for the Big Blue Snail who had none. "We needed a soundtrack," said the Wabbit.
at September 09, 2011