1. The Wabbit and the Strange Occurrence 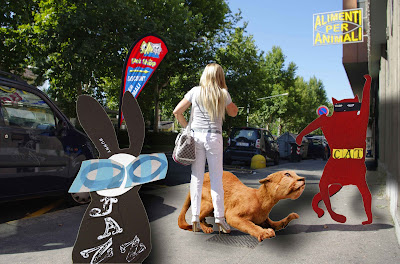 It was a sunny Monday morning and the Wabbit was waiting when suddenly Skratch hove into sight with Puma in tow. "Who's that woman?" said the Wabbit. "She's not with us," replied Skratch. "Why am I here?" asked the Wabbit. "To discuss a strange occurrence near my residence," said Puma. The Wabbit pondered and asked himself what kind of occurrence would be strange to a Puma. He looked at the two felines for a moment. "Let's get a snack in the pet shop and consider it," he said in a kindly fashion. Skratch the Cat Burglar disappeared into to the pet shop and reappeared directly, bearing snacks. There was a lot of rustling as they all tucked in. "So," said the Wabbit, when the sounds of munching ceased. "The Strange Occurrence." "Down by the river, where I prowl," said the Puma, "there is a routine gathering." "Tuesdays at eleven," said Skratch. "And what is the nature of this gathering?" asked the Wabbit. "People go hither and thither and exchange things in a flurry," said Skratch. "It’s dubious." "Definitely, if you say so Skratch," said the Wabbit. "Then suddenly they’re gone as if they were never there," growled Puma. "I'll meet you here tomorrow at breakfast," sugggested the Wabbit, "and we shall conduct surveillance." "OK," said the Puma. "Do you know that woman hasn't moved? Do you think she's a spy?" "No," said the Wabbit. "You're lying on her feet."
at September 18, 2011