The Wabbit carries out Surveillance 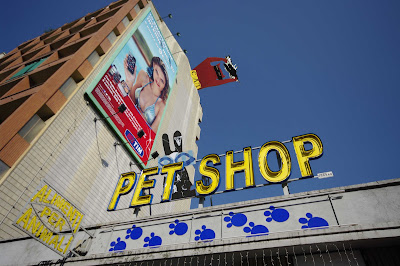 The Wabbit followed the woman until she entered a narrow courtyard and went into a pet shop. "Aha! A pet shop, eh?" said the Wabbit enigmatically to himself. The Wabbit's briefing papers indicated that pet shops were sometimes used illicitly by the sinister agents of Rabit. No-one, far less the pet shop owners, knew of Rabit's clandestine activities. So the Wabbit hopped right up and onto the low roof. He looked up and down the street and watched all the people going in and out of the pet shop. The Wabbit counted them in and he counted them back out again. But of the sinister agents of Rabit, he could find no trace. The Wabbit began to think that on this occasion he would have to admit he had drawn a blank. There was simply nothing to report. Suddenly his wabbit instinct urged him to jump to the side. There was a resounding crash just where the Wabbit had been standing and a heavy object smashed to smithereens on the base of the pet shop sign. He looked up to the adjacent building to see from whence it came and caught a flash of red as Skratch the Cat Burglar disappeared across the rooftops. "Gotcha," said the Wabbit. "Skratch my friend. Your days of freedom are most certainly numbered."
at July 01, 2011