The Wabbit in an Alternative Transport Reality 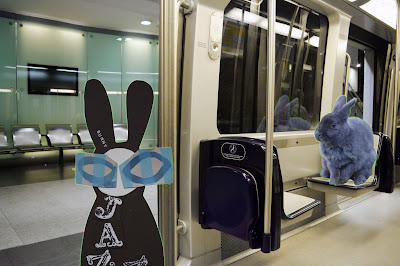 Lapinette finished her aperitivo and caused the Wabbit to order two more. "I'm guessing that the train came eventually," she prompted. The Wabbit was anxious to continue. "Quite quickly as it happened. I followed the wabbit into the compartment and looked at the stations on the map but they were all different. So I spoke to him." "In backwards?" asked Lapinette. "No. At that point in forwards just seemed to work." said the Wabbbit. "I asked which station was Pozzo Strada and he said Carote. So then I asked what station we came from and he said Sedano." "So you got on at Celery to go to Carrots," said Lapinette, "then what?" "Then he took out a shopping bag full of celery chunks and said he needed carrot chunks to make a stock." "It was a food reality," said Lapinette. The Wabbit ignored this and moved on. "I was staring at the celery chunks and they started moving around. They jumped up and down and started demanding carrot chunks. They were rather vociferous." "A holographic food reality," said Lapinette. "That may be," said the Wabbit." "But my new friend got up and said "I'm here and not before time. The celery can get very, very angry."" "What did you do?" said Lapinette. The Wabbit adopted a serious expression. "I persuaded him to sit down and stay on until Risotto."
at July 15, 2011