The Wabbit makes an Arrest 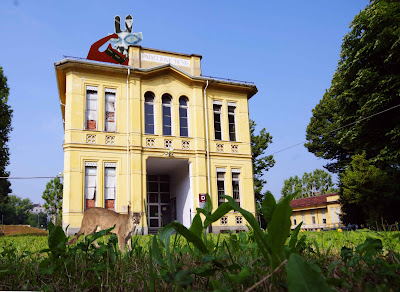 The Wabbit was so furious that he employed his special powers. So seldom did he use them that he hardly noticed his giant leap to the top of the building. At once he sprang on Skratch and pinned him by the shoulder. "Ouch!" said Skratch."Let go!" "I arrest you under the laws and codes laid down by the Convention on International Trade in Endangered Species of Wild Fauna and Flora," said the Wabbit at length. The Wabbit didn't really know the ins and outs of the legal position, but he knew he did not care. "I didn't know, it wasn't me," said Skratch. "The puma was already here when I arrived." "Species smuggling is forbidden," said the Wabbit. "You should be ashamed. That puma is a fellow feline." "I quite like him," said Skratch. "And you would sell him into servitude," said the Wabbit. "That's just not fair." "Perhaps we can come to an accommodation," said Skratch, who's arm was hurting. "I have some accommodation in mind for you," said the Wabbit and you may get time off for good behaviour." The Wabbit fished in his his fur for his communication device and when he found it, he indiscriminately pressed as many keys as he could find. "I'm calling this one in, Skratch. Perhaps Lapinette will find time to visit. I don't know why she has a soft spot for you." "Please don't tell her," said Skratch. "Perhaps we can come to an accommodation," smiled the Wabbit.
at July 06, 2011