The Wabbit gets Scientific (with some help) 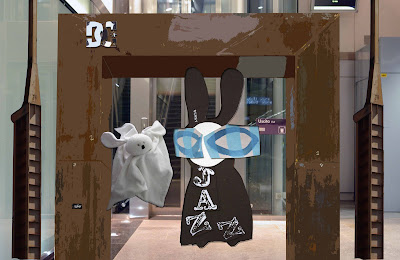 The Wabbit and Lovely Lapinette finished their aperitivi and headed to the market for carrots. As they hopped along, the Wabbit pressed on with his story. When he noticed Lapinette looking a little quizzical he stopped. "Look," said the Wabbit, "it was indeed a ghost wabbit and she said she would like to frighten me on my way. So she floated into the lift with me and down we went." "A ghost wabbit?" asked Lapinette. "Are you sure?" "Yes," said the Wabbit. "She came from the ghost field - or so she said. Does that might make sense to you." "It does," nodded Lapinette and flapped her ears in excitement. "Ghost fields keep wormholes stable so that you can travel a long way quickly." "I told you, I told you, I told you," said the Wabbit too many times. "We passed through a big gate and a robotic voice asked if we had packed our own fur." "You always pack your own fur," said Lapinette. "I do," said the Wabbit. "But Ghost Bunny, as she called herself, uttered an algebraic sequence." "Uttered?" asked Lapinette. "Uttered," said the Wabbit. "It went as follows: r = a-κ²(4π²λ²/Δ²a). The Gate said "OK" and we just floated through and onto the train." "I'm impressed," said Lapinette. The Wabbit grinned ear to ear with all of his 28 teeth.
at July 26, 2011