The Wabbit and the River Wild 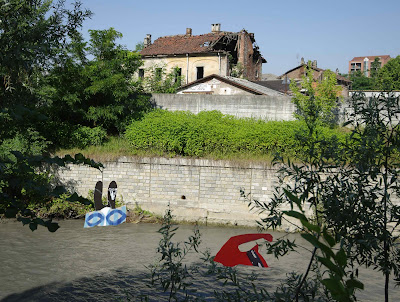 The Wabbit couldn't believe his eyes. When Skratch plunged into the swirling river he rubbed them both with his paws and looked again. He knew that Skratch hated water as much he hated birds and the water looked none too clean. Skratch headed against the current and the Wabbit hopped into the water and stayed close behind. The Wabbit was a strong swimmer. Like the marsh wabbits with whom he had carried out his training, his hind legs had slightly less fur and longer nails. So he punted along happily and with considerable stealth. "I think," thought the Wabbit, "that Skratch has an even more secret hideout which can be readily reached by water." It was easy to swim after Skratch since he splashed far too much and made a wheezing noise that was audible even above the sound of the rushing waters. Skratch disappeared round a bend but the the Wabbit knew exactly where he was because he could hear him making sounds like a deflating air mattress. The Wabbit watched as Skratch made his way up the river bank and followed him through the dense undergrowth onto a curious walled island full of strange dilapidated buildings.
at July 04, 2011