The Wabbit in the Urban Wasteland 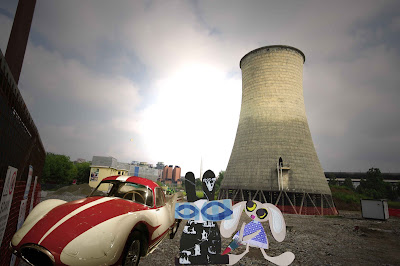 The Wabbit had arranged to meet Lapinette at a desolate spot on the edge of town with no-one else around. The heat from the bare earth scorched the Wabbit's paws as he looked around. He grinned as he watched Lapinette hop out of Turbina the Jet Car. She clowned around making a lot of growling noises. "Grrr pussy-cat, grrr pussy-cat," purred Lapinette. She waved her paws up and down, miming a big cat from the jungle. "Most amusing," said the Wabbit, pretending to be annoyed. Clearly the puma story had preceded him and he wondered how far it had spread. "Quite far," said Turbina who always seemed to know what the Wabbit was thinking. "Now don't be a spoilsport, tiger," said Lapinette. "What kind of adventure was that, would you say?" "It was rather formal narrative," said the Wabbit, "with a beginning, a middle and an end." "You really need to lighten up," said Lapinette. "Are you still angry with the forestry man?" "Not I," said the Wabbit, thinking of the report he would write. He rubbed his paws together and smiled a sinister smile with all of his 28 teeth. "Shall we dine out?" he ventured. "Not here," said Lapinette. "Unless you want a fried salad burger." "I'd rather go hungry." said the Wabbit. Then they both giggled and giggled until even Turbina joined in.
at July 09, 2011