The Wabbit and the Curious Case of the Puma 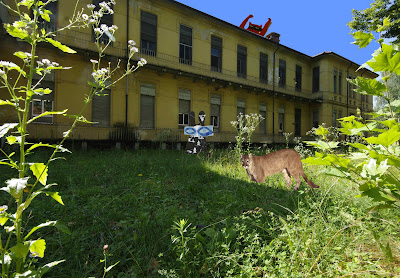 The Wabbit found himself in the grounds of an old abandoned hospital and he hopped around the first building he came to. But what he saw pacing the grounds made him come to a sudden halt. A puma stood in the long grass. If the Wabbit knew his pumas, he knew one thing. They had unfortunate eating habits. So the Wabbit stayed upwind and out of the puma's stomach. He crouched in the shade of the building and watched as the puma strolled up and down. "Pumas seem to stroll a lot," thought the Wabbit. As long as the puma was strolling it wasn't eating. So the Wabbit hoped it continued to stroll and he stayed very calm and still. Then out the corner of his eye he saw that flash of red again and it came from high on the roof. "Skratch!" said the Wabbit quietly to himself. He had been so concerned with the puma that he had almost forgotten his adversary. There and then, in single moment of clarity, the Wabbit knew he knew everything. Well, almost everything - so he thought quickly. "The puma is a native of the Americas," he mused, "and he is endangered. This fellow should not be here." The Wabbit rather sympathised with the plight of the puma despite his tastes in food. "The Wabbit realised with horror that Skratch has moved from stealing silverware to smuggling. "And here the matter ends," said the Wabbit.
at July 05, 2011