The Wabbit and the Ruined House 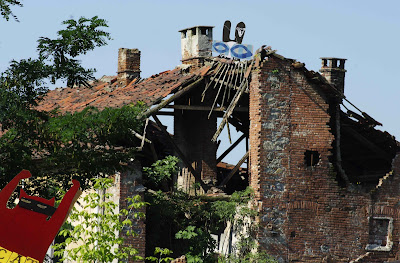 The Wabbit raced around the building. His powerful rear legs punted him at an enormous speed and little white puffs of city dust trailed behind him. He could see something red near the side of the river so he screeched to a halt. His sharp eyes caught a feline flash near an old ruined house. "Just the sort of place that Skratch would hole up," thought the Wabbit colloquially. He adopted a slower and more cautious pace and quietly circled round the back. There were signs everywhere that said "Danger of Accident" and "Keep off", which the Wabbit duly ignored. He hopped onto what remained of the roof and peered through the ruined rafters. There, by a wall on the ground floor, was a collection of premium cat food tins, a comfortable basket, a state-of-the-art digital radio and a sack brimming with silver ornaments. The Wabbit made a soft whistling sound and chattered his teeth gently. "Skratch's lair, I'll be bound," he thought. "I'm going to flush him out." He stretched out a paw and taking a twig, he startled a bird in the rafters. The Wabbit figured Skratch would have an extreme reaction to wing-ed things and he was right. Skratch yowled loudly and chased after the bird, and the Wabbit carefully followed.
at July 01, 2011