The Wabbit gets more than Carrots at the Market 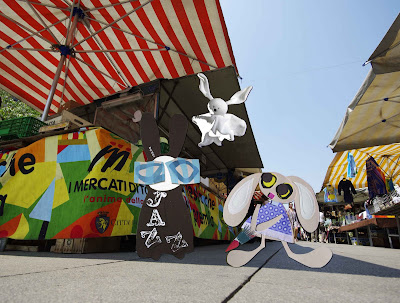 Lapinette cut into the Wabbit's story. "I want curly carrots," she said. "Straight carrots are not for me. And I need some celery chunks." The Wabbit looked at Lapinette cautiously. " I hope you're not planning an experiment with quantum mechanics." "No," said Lapinette, "I was thinking of lunch." "By coincidence," said the Wabbit, "that brings me to the end of my story. Our journey was rapid. When the train pulled into a station called Spices, Ghost Bunny indicated that she would alight there for provisions." "It is my understanding," said Lapinette, "that ghosts do not require provisions." The Wabbit nodded his head vigorously. "But this was no ordinary ghost. She produced a tiny shopping bag, which became quite large, and a loyalty card for the supermarket." "Now you're pulling my leg," said Lapinette and tapped the Wabbit none too lightly on the shin. The Wabbit was adamant. "The card said Ms G Bunny and there was very long number." "What next?" asked Lapinette. The Wabbit shrugged. "I have to admit I fell asleep. All that travel is quite tiring. When I woke, I was sitting on a bench just over there." "If you teleported here, perhaps you're not the original Wabbit," said Lapinette. "Where's your emergency coin?" The Wabbit frantically patted his fur all over and made a face. "It's the original," said Lapinette. "So what became of Ghost Bunny?" "I suppose she went back to Pluto," said the Wabbit. "Noooooh not likely," wailed Ghost Bunny.
at July 29, 2011