The Wabbit takes the Tram across the Dora 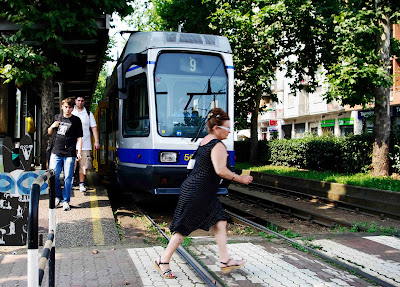 The Wabbit had received special instructions to take the Number 9 tram to Corso Swizzera and to hop around the area. He had been warned it was rather industrial with a number of hideaways that were perfect for the Agents of Rabit. The Carabinieri had also been kind enough to advise him that Skratch the Cat Burglar had been recently released from custody. Apparently he was likely to have gone to ground in the same district. The Wabbit wondered whether Skratch had forged some kind of alliance with Rabit but resisted the thought. "If Skratch is anything, he is independent," thought the Wabbit. "He's probably casing a joint in order to relieve some poor person of their expensive and treasured diamonds." The Wabbit looked out of the tram window and it didn't seem possible. The tram had just passed across the River Dora and the Wabbit could see industrial units in every cranny. This was clearly not a diamonds place but one of yards and vehicles and shops selling tyres and pneumatic compressors. The Wabbit couldn't envisage Skratch using a pneumatic compressor unless it was to help drill through the door of a safe. "Oh, I suppose pneumatic compressors have got to come from somewhere," mused the Wabbit as he got off the tram. "That woman seems in quite a hurry. I'll go her way and see what's what." The Wabbit quickly loped across the tram lines in pursuit and hopped south towards the river.
at June 29, 2011