The Wabbit and the Space Time Continuum 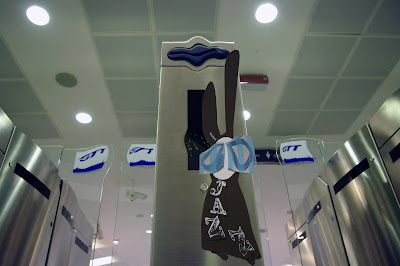 The Wabbit and Lapinette's food had arrrived and they set about their carrot curls with vigour. When Lapinette paused, the Wabbit asked "Shall I begin?" "Begin," she said. "I will," said the Wabbit. "I had to deliver a package to a wabbit at Pozzo Strada and I thought I would save my paws and take the Metro." "You're always saving your paws," said Lapinette. "Allow me to continue," said the Wabbit. "I made my way down the stairs and was going to hop through the barriers." "You just hop through?" said Lapinette. "I have a special pass," said the Wabbit. "There was no one around, which was unusual enough. And there was an eerie silence. I couldn't even hear the escalator. Everything was still and rather spooky. I made my way to the barriers and felt in my fur for my pass." "You keep your pass in your fur?" asked Lapinette with horror. "Doesn't everyone?" said the Wabbit. "But before I could pull it out, I felt a strange sensation as if my ears were curling upwards. I thought it was that draught the train makes when it's coming." "Your fur is standing on end," said Lapinette."Is it?" said the Wabbit. "It was the same sensation as I had at the Egyptian Museum. I looked at my feet and they seemed to be moving away from the ground. Then I saw my reflection. Starting with my ears, I was being steadily drawn through the narrow slot of the ticket machine ..."
at July 13, 2011