The Wabbit, sometimes at the Edge of the Galaxy 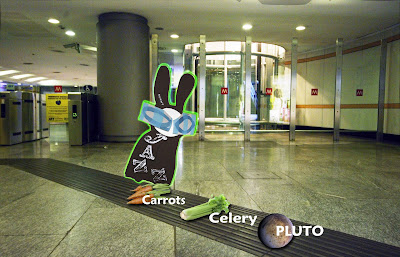 The Wabbit wasn't finished with his story and if he was bamboozled by Lapinette's knowledge, he had no intention of showing it. "I know where you're going with this and it isn't cut and fried," said the Wabbit. Lapinette dissolved into helpless mirth and nearly spilled her aperitivo. The Wabbit caught her glass and contnued. "The field carries a vortex which is the singularity of the curl of the carrot," he invented quickly. Lapinettte clapped her paws at this attempt. "That's mainstream physics. Tell me what happened next." Lapinette leant forward and gazed at the Wabbit. "The scene changed and the grass and the wabbits were gone. I looked down and noticed a Metro map." The Wabbit paused for effect and gazed back at Lapinette. "It was a 3-D picture map. But it wasn't quite right. The carrots and celery were there. But at the end of the line there was a planet and it was labelled Pluto." "Pluuuto!"squealed Lapinette in a high-pitched voice. "Pluto isn't a real planet, it's designated a dwarf." "That's very unfair, even if it is eccentric," said the Wabbit. "I decided to get back on the train until Pluto. "I hope you had your winter coat," said Lapinette. "And a book," said the Wabbit.
at July 22, 2011