The Wabbit and the Singing Celery 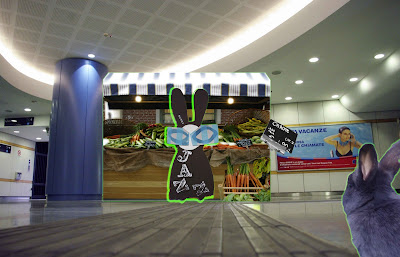 "How did you know there was a station called Risotto?" asked Lapinette, who was looking at her celery aperitivo with new found respect." "I didn't," said the Wabbit. It just jumped into my head. But the train drew into Risotto and the giant wabbit and I got off with the celery chunks in full voice. They quite drowned out the muzak." "Singing celery," giggled Lapinette "There's a market for that." The Wabbit gave Lapinette a warning glance and continued. "I led the way, although not by choice. At the top of the escalator, I saw a market stall. So I took up position by the vegetables and felt impelled to shout, "Carrots from Lazio. Just dug!"" "Just dug?" said Lapinette. "I kid you not," said the Wabbit. "Then, as the celery chunks drew close to the carrots, they assembled themselves into ornate spirals and danced.” "Fractal cosmology!" cried Lapinette. She clapped her paws in delight and demanded to know about the carrots. "Ah, I was getting to them." said the Wabbit." They gathered into a carrot pyramid lattices and then the celery chunks weaved in and out, singing." Lapinette smiled a knowledgeable smile. "Oh yes, fractal lattices. Now that might account for the noise you heard." The Wabbit nodded. "That's as may be, but they were singing "The Wabbit's a jolly good fellow, and so say all of us." "Spooky," agreed Lapinette.